I just found old pictures of we project that I had in High School. I thought that it might be interesting to share it with you !

It was in engineering class, there were three of us in my group and we had to make this six-legged thing walk :

“This” is what we were given at the beginning of the project.

To make it walk, he had to control 12 servo motors (two per leg) with an external card (I can’t remember its name) linked to an Arduino card.

The robot was following the walls of a room. So we needed two ultrasonic range finder in order to avoid and follow them.

Finally, this yellow/ugly thing needed a lot of power to move. So we used a LiPo battery to power it, the same kind of batteries that are used in RC planes.

The electronic part was going well, but our hexapod had difficulties walking because of mechanical reasons. So as our school had a 3d printer (yeah I know we were lucky !), we decided to recreate the robot on Solidworks and to print it.

While modeling, we knew what sensors,card and battery we were using, so we were able to make sure that everything would fit perfectly and smoothly. 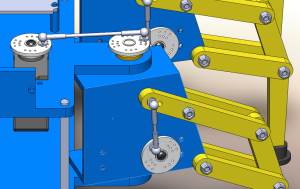 3D model on solidworks, this model was then printed

Final model once printed and assembled.

Some pieces were too big to be printed in one time. So he had to split the two main pieces in three. This explains why the color are different !

This project was really interesting because he had the possibility to see all the different steps, from conception to testing, of the creation of this hexapod. We were also free to do what we wanted (as long as the cost was not too big) and that was a cool experience.